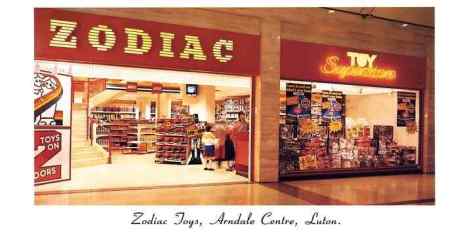 This is a remembrance website for a retail group that ceased trading in 1990. In  its heyday in the mid-80s Zodiac was the UK’s leading toy retailer with 80+ branches.

STOP PRESS: Check out the Newsletter Page …. copies currently being uploaded. Some will open in your browser, others need to be downloaded as PDFs.

Zodiac Toys was founded in the late 1960s by Maynards,  famous for their Wine Gums.

In the mid 1960’s Maynards was struggling, and was  becoming increasingly concerned about its dependence on the static confectionery market. They already had a large chain of shops selling confectionery, news and cigarettes, so they knew quite a bit about multiple retailing, but in many locations they faced stiff competition. With the help of consultants, it was decided that diversification was the answer and whilst there were dozens of multiples in the food, clothing, jewellery and other trades, there were very few in the toy business.  Maynards already had a few toy and pram shops in the London area and in 1969 these were converted to self service toy shops with a range of 800 to 1000 keenly priced items. The success of this was almost entirely due to Brian Richman, who Maynards had recruited to take control of the Zodiac division. He had previously been with BHS and M&S in senior manager positions and was well acquainted with multiple retail operations. The concept was new and successful and by 1977 there were 39 shops producing annual sales of £4.5 million. In 1978, Managing Director Brian Richman left to take up a senior position with Debenhams.

Into his shoes stepped Bryan Ellis, who had previously been with Hestair, and who dealt with Zodiac’s warehousing and distribution following the acquisition of I Angel Ltd. He was to initiate the changes which were to make Zodiac the UK’s leading toy supermarket. More stores were opened and they grew in size. By 1984 there were 73 branches and sales totalled £23 million. 10 more stores were added in the next 2 years but then Maynards became the takeover target of Ward White who owned Halfords and Focus Shoes.

Ward White believed that the application of its retailing expertise in the cycle and automobile aftermarket would significantly improve the fortunes of the Zodiac chain. They assumed that the merchandising disciplines which worked so well in Halfords could be easily replicated at Zodiac. They were mistaken, and disposed of the chain after only 2 years. It was sold to a company led by Russell King, an entrepreneur with an extravagant lifestyle and a liking for fast cars. Matters went from bad to worse and the chain folded in 1989/90. At the time of closure, Zodiac was trading from more than 90 branches in the UK. Mr King was later found guilty of an insurance fraud concerning his £600,000 Aston Martin. He served a  two year prison sentence.

This site was created by Roger Jones, an employee of Zodiac Toys from 1972 to 1986. Joining from a management career with Woolworth, he was Zodiac’s area controller in the Midlands, progressing to Regional Manager and then Retail Operations Director in 1980 reporting to Bryan Ellis and the Maynards board. Much of the information on this site comes from Roger’s own records and 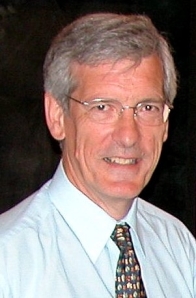 photos, and from copies of Maynards Newsletters and annual reports.

In due course this website will be expanded to include shop profiles and details of those who were involved with Zodiac in the years between 1969 and 1989. This website will evolve over time. Contributions are welcome and can be sent to Roger Jones at ziksby@gmail.com.

One thought on “About”